I was just rereading my earlier post outlining my plan for the summer. Things went more or less according to plan.

So. What’s next? Into the rivers and south.

I’m super pleased to have been welcomed back at Crowley’s. I worked out of the old yard from 1989 – 93 and they were a class act then. They still are. Same active owner management and a team that includes many from my tenure. So I’m hanging there until Nov 2. I have a list of maintenance and improvements that they’re helping me with. 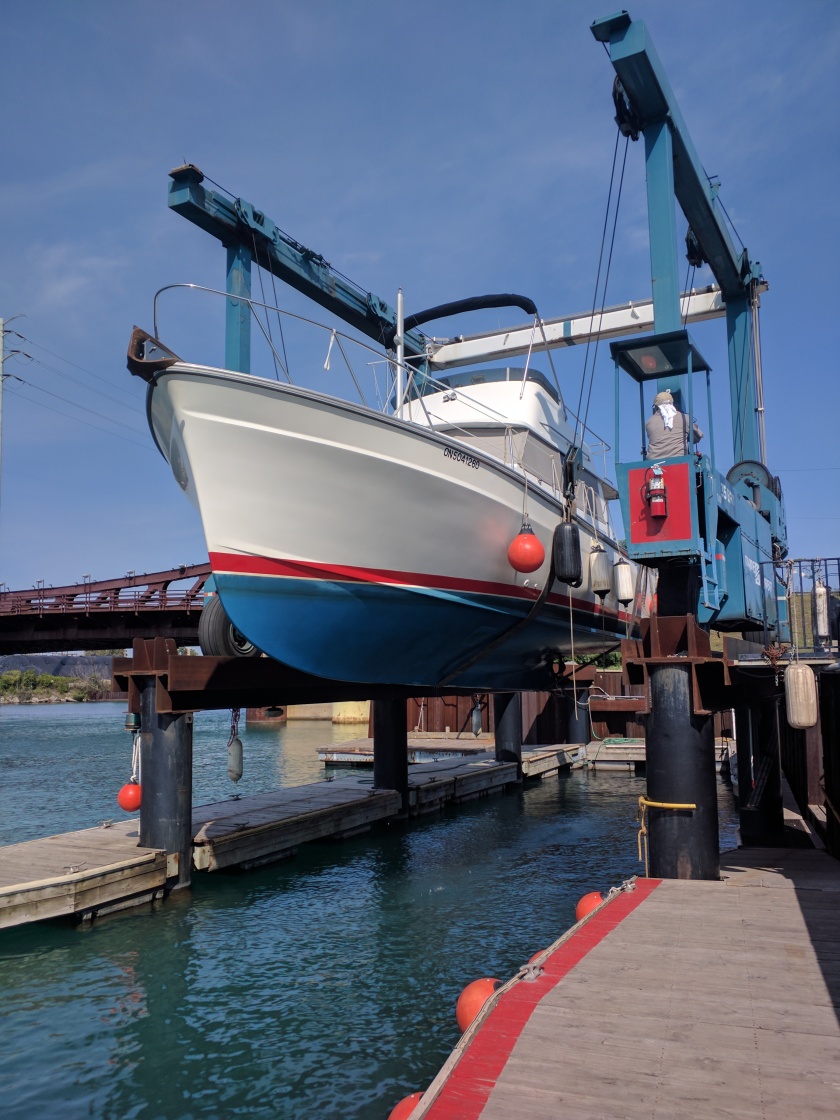 That puts me at the tail end of the fall migration. I’m ok with that. I generally avoid marinas, am self sufficient in terms of fuel and water, and have enclosed steering and heat. I’m not really afraid of the weather. But it does to an extent impose constraints. I’ve got to get below the snowbelt pretty quick, and everything is more enjoyable in fair weather.

Where do I want to end up? That’s the thing. I don’t really have a destination. But I do want to keep moving.

Before I forget – I’m docked basically at the Illinois – Indiana border at the mouth of the Calumet River. If I had visitors (hint hint) I would love to do a boat tour on Mazurka going up the lake to downtown Chicago, into the river, through downtown then into the industrial section and down the Calumet to get back. Any readers of this are encouraged to book now. Just bring a picnic lunch and promise to feign interest :-). I’d promise fall colours but we may not see a lot of trees.

Back to the itinerary. I’ve been making a bit of a study of looping and Loopers. I’m not quite ready to join that club. If I complete the Great Loop I suppose I’ll recognize the occasion, but it is not really a goal, and not really the right identity for me. I do want to recognize the strong community and identity that Loopers have. I’m a member of the AGLA and I think they’ve done a lot to create that identity. From the Trent Severn to Chicago everyone along the way knew about Loopers, and at times it was convenient and helpful to self-identity as a Looper. I was chatting with my old boss and friend Bruce about this and he whipped out the Groucho Marx classic about not wanting to be a member of a club that would have me. That sort of sums it up nicely.

So I need a mission statement. Here goes. And I can’t get the Star Trek intro out of my head.

‘To travel and explore all the inland navigable waters of eastern Canada and the US.”

I don’t think I need to say anything more than that. I don’t really have an end date in mind. I currently have the majority of my time available to dedicate to the mission, but that may change. I have what I think is a reasonable boat to achieve this broad mission. Not perfect, but in general a boat that meets my needs pretty well and that I like a lot.

When I think about what comes next and what I look forward to, the great rivers of the Mississippi basin come to mind immediately. I’ve spent lots of time in SE Florida and the northern Bahamas, and there is some appeal, but I’m also happy avoiding or limiting the whole Florida scene, at least the east coast. And while I haven’t done the entire Atlantic Intracoastal Waterway (AICW) I’ve done enough of it to know what to expect. Concerns there too with the northbound hordes in the spring. I’d rather avoid the crowds. The more I think about it the more I think I should avoid the traditional Looper path.

I did the first part of that trip in November 1992 with Samantha on a sailboat with the mast down. We went from Chicago to West Alton. She didn’t much like it, and the Loopers don’t much like this segment either. But I remember it with fondness. The Mississippi segment will be a new adventure, one that I’ve long looked forward to.

What happens at Cairo? That’s the question. The standard Looper route is to leave the Mississippi there, and go briefly up the Ohio, then south to the Kentucky Lakes then down to Mobile AL via the Tennesee-Tombigby waterway. It’s a well traveled path for yachts heading south.

One of the questions is how much time I have to linger and explore. This area is rich with opportunities. I want to do the Ohio and Tennessee rivers end to end. But given seasonal constraints I think I don’t have time before winter. I think I need to be at or near the Gulf coast by late November.

I’m also thinking of my 2019 goals and constraints. I really want to be back in Georgian Bay next summer. It’s beautiful, close to home, and back in Canada.

So here’s my tentative plan. Instead of getting off the Mississippi at Cairo, I will continue on for another 640 miles to the entrance to the Atchfalaya River. From there I do some local exploration and end up going through Morgan City to the gulf. Then I can either turn right towards Texas and Mexico or left towards Alabama and Florida. Or just hang out in the Bayou.

In any case, this plan calls for an early spring trip north through the Tennesee-Tombigbee, hopefully time to explore the Tennessee and/or Ohio rivers, then from Cairo back up to Chicago and from there to Georgian Bay. I have to check weather stats, but winter is pretty brief in the mid south. I have to think I could start north in early March.

I have about six weeks to finalize this plan, and to be honest may not decide which way to go until I’m close to Cairo. Much too depends on water levels and flows. Some angry/dangerous water is inevitable, but caution, diligence and good judgement is called for. But I’m also happy to hunker down when it’s appropriate. Have lots of flexibility and no fixed deadlines.

Probably the biggest argument against this route is that parts of it involve fighting the current. I’m not wild about the idea, but my boat is fast enough to do it, and I can try to pick windows of travel on these segments. In general spring isn’t great because of winter runoff, but with climate change upon us the old generalizations aren’t as useful as they used to be. I’m willing to face those challenges and risks.