The next morning dawned cold but clear, and we were off again: back to the main channel/The Intercoastal Waterway, heading for the Gulf; after a quick breakfast we were drinking coffee and smoking cigarettes on the top deck and taking in the scenery. The kind of boats we had been seeing all yesterday – and, indeed, much of the human habitation which lined the shores – had now dropped away; on either side was what, in England, one would call “fens,” i.e. marshes riddled with shallow channels, with the more than occasional sign of the oil industry in the form of pipelines and (I think) small wells. This eventually gave way to a return of boats – although they would more properly be called ships… and lots of them; also, any number of drilling platforms. 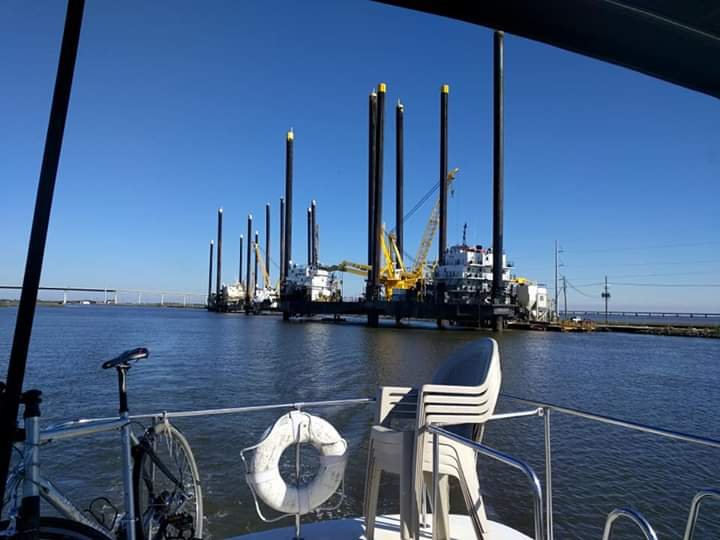 Early on, and while still in the channel, we were accompanied by a dolphin – or, perhaps, a porpoise. We had seen one fleetingly the day before, and I was pretty happy about this – I’ve been whale watching a number of times, but I’d never seen a porpoise or dolphin. (Jeff was a bit more sanguine about it: he’s been sailing since he was young, and has numerous times had dolphins accompanying his boats). This turned out to be a prelude of things to come for the day…

Within about an hour – and with the day getting noticeably warmer and brighter as we went on – we were in the Gulf.

The light was dazzling; all around us, some off in the distance, some closer in, were drilling platforms with derricks and various other oil industry paraphernalia, and ships and boats servicing them, or heading further out into the Gulf for fishing and the like.

Jeff wanted to try cutting around the back of Grand Isle, but it turned out that the water was too shallow once we got inside the break-water, so we turned back into the Gulf and headed for the end of Grand Isle, where we intended to spend the night. While in behind Grand Isle we encountered more dolphins – and definitely dolphins this time. One of them almost seemed to be attempting to guide our boat out of the shallows and back beyond the break-water; as we headed back out into the Gulf, there was a considerable school of them. And then, once back out into the Gulf, we spotted a commotion off in the distance. As we approached, suddenly there were dolphins all around us, coming quite close into the boat in a way that they hadn’t before, and, not too far off, engaging in leaps and flips – we were in the midst of a veritable dolphin playground. I got some great video of them.

Jeff tried for an anchorage just around the tip of Grand Isle, but the wind and current weren’t going to allow for it, so we ended up sailing across a considerable span of open water all the while accompanied by the occasional dolphin, and an almost continuous flock of seagulls.

We anchored for the night this time just off the bayou we were to headed into the next day, looking out towards the Gulf under an absolutely clear sky full of stars.

The next morning was once again clear; we were back into the bayou, heading for the Intercoastal Waterway and the return-trip. Back to more human habitation, with lots of boats – both functional and derelict – and including a rather forlorn paddle-boat steamer from (relative) days of yore. 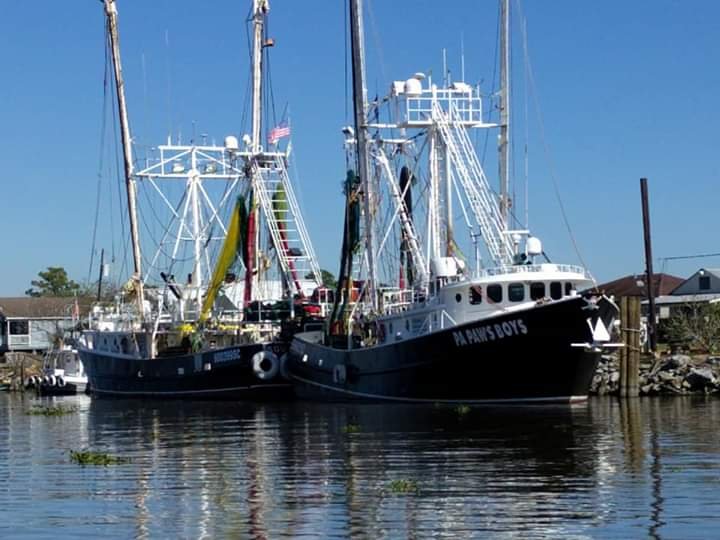 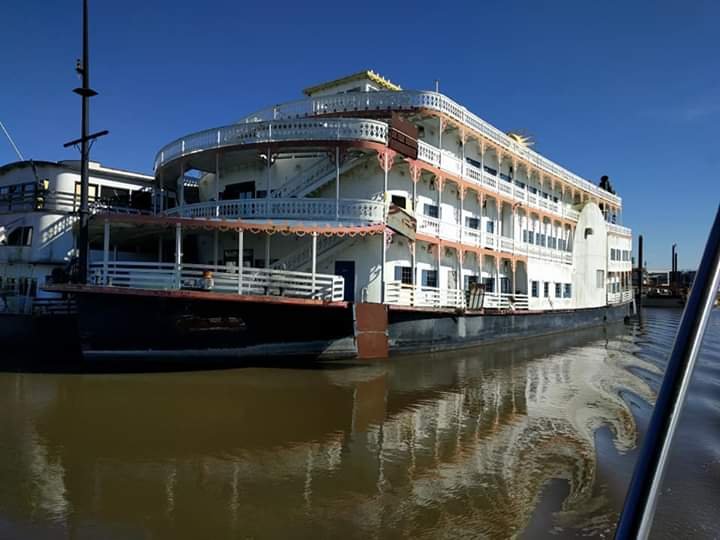 When we had started out on our journey, a few of the locals had warned us about the possibility of spending a long time at bridges. While we had encountered a fair number of the way down, we had to wait for none of them. Today turned out to make for the longest wait of our entire trip for a bridge, but that only took about 10-15 minutes – there was obviously someone in the cabin over the bridge the whole time, and for whatever reason, they weren’t responding to us. Finally passing through the bridge, I got a pretty good picture of a pair of pelicans.

We stopped early for the day: I’m a Liverpool FC fan, and they had a make or break game against FC Napoli in the Champions League which I was hoping to pull up on Wifi. We anchored just off the Intercoastal Waterway – tomorrow, we’d be heading back to Houma.

The Wifi connection worked and Liverpool won, but just by scraping by with a single goal. We ate early, and then Jeff taught me how to play a card game called Scopa – it reminded me very much of a game I played a lot with my kids called Casino. I won the first round, then we tied the second; a single hand decided the contest – too much like a penalty shoot-out in soccer to be a real decider (but I won – beginner’s luck!)

Our final day on the boat dawned clear but got cloudier, and warmer, as the day commenced. While we were back on the Intercoastal Waterway and off the bayou, we were actually running along the edge of a protected swamp. But, being back on the Waterway, we were once again encountering a lot of commercial traffic – especially barges of the type Jeff told me he had encountered a lot which sailing down the Mississippi (those were often a lot bigger). 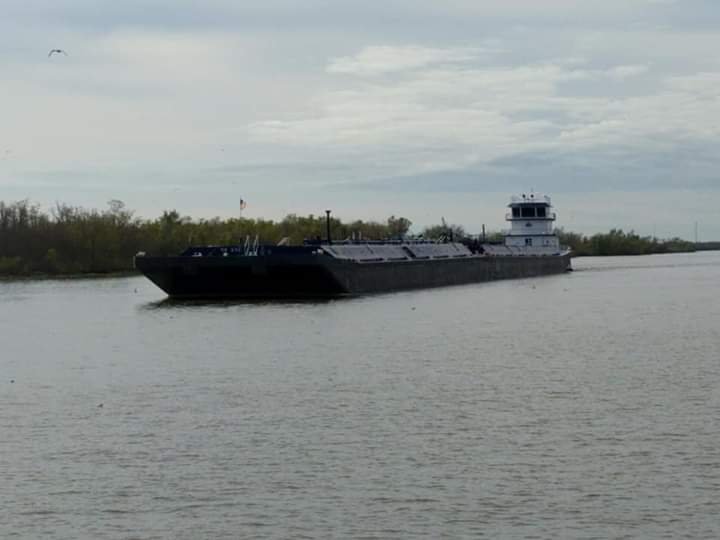 The swamp eventually gave way to more human habitation and boats… and some impressive boat-building/repair dry-docks. 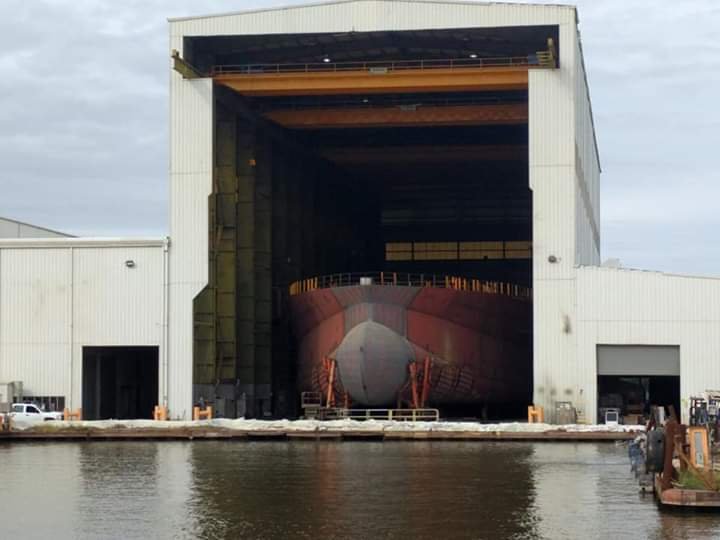 Jeff had been doing all the navigating, and it took me a while to realize that we were heading back the way we had come. As the day got warmer, both of us started to think about the possibility of seeing a live gator – we were assiduously scanning the banks for them as we went along – and once I realized we were returning by the same route, I raised the possibility of us seeing “Bob” (as I decided to christen the dead gator) again. In retrospect, I think we might have seen him in the bayou off the Waterway. And, we failed to see a live gator. However, we began to notice a fair number of holes in the banks. These could have been caused by any number of creatures – when we got back to Houma, one of the locals told us about a species of water-rat that had invaded the region, and it seems that many of the holes were probably their responsibility – but there could also be little doubt that some of them were the home of gators, who I knew holed up in big burrowed holes in the bank. And, in what turned out to be no more than an hour or so from our return destination, I had been scanning the shore opposite and spotted something; Jeff took us in for a closer look. 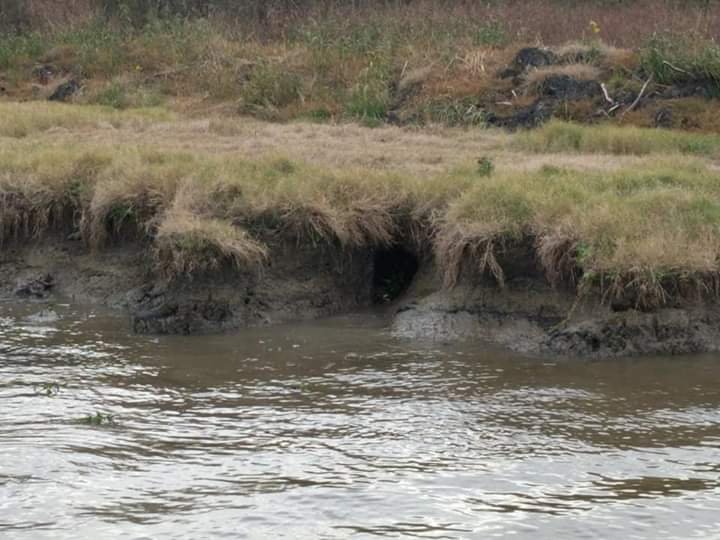 There could be no doubt about it: this was a gator-hole. Jeff blasted the air-horn to try to get the gator’s attention (!), but to no avail.
We were back in Houma for early evening. Jeff needed to do a few repairs on the boat – it had been taking in some water, and the seal on his recently installed radar needed fixing – so we took a trip into town for supplies. By the time we returned and Jeff had located and fixed the source of the leak, it was supper time – Jeff had an invite from Ronney to meet some of the locals, a number of whom had been following his blog at a marina/bar in town, and I tagged along. We had a fine time – it turned out we had lucked into a long-standing Wednesday night tradition wherein a number of locals got together for a kind of pot-luck in a restaurant-style kitchen. After a great meal of imported speckled trout (farmed in Vietnam), and some very warm, archetypical southern Louisiana hospitality, we were back to the boat in time to fix the seal on the radar. Then, one last sleep and an early start on what turned out to be a two day ride home.

(Goodbye to The Mazurka)

A very great deal of thanks to Jeff for this invitation, and for all the planning, sailing and navigating along the way; I can say that my greatest contribution, such as it was, was the cooking, and beyond that, the whiskey (and bringing the car down from Chicago). And, I hope, the good company and conversation. I’d love to do it, or something like it, again sometime… and someday, somehow, Jeff, we’re going to have to see a *live* gator together.