I flew to Chicago on Thursday, December 6, to pick up Jeff’s car and drive down to hang out with him on his boat in Louisiana. Jeff and I had spent a couple of days together in Louisiana a few years back, when one day we had driven down from New Orleans to the gulf coast, and then the next day up the Mississippi to check out the levies and look for gators. That was in February, so gators were scarce; we did see lots of birds, though, and I’m a bird watcher, so that was great. December’s not the best time for gators either, but I had some minor hopes of seeing one, as sometimes on a warm day in December, they’ll come out. But of course, I was also just looking forwards to hanging out on a boat with Jeff for a few days in Louisiana.

I took a taxi from the airport in Chicago to the boat-yard where Jeff had left his car. The taxi driver offered to wait for me until I met up with the right people due to the neighbourhood (“the south side of Chicago… back in the good old days… back in the U.S.A.” – Paper’s Lace’s song kept going through my head…), but there was really no need: the boat yard is a world unto itself, and I met up with Jeff’s friends no problem. But… the car wouldn’t start. Two boosts to the battery later, and I was off, stopping on the outskirts of Chicago only to let Jeff (who I’d been in contact with during the booster kerfuffle) know that I was on my way.

The drive was a lot of fun. I put aside the urge to stop and see some sights on the way as I wanted to make time, but this was the first time I’d been down through the middle of the U.S., so I was chuffed to pass by signs for Johnny Cash’s birthplace, Graceland, and (towards the end of the trip) the Bo Diddley Memorial Highway. Also, somewhere in Missouri, I passed by a town called Braggadocio, which is a word that was coined by the English Poet Edmund Spenser whom I’m a sometime scholar of. I wondered if they know of its origin? And, I can recommend the visitors center to Alabama, which was all decked out for Christmas, had free Wifi, and free coffee. I can also recommend whatever the hip-hop station is that broadcasts out of Jackson, Mississippi – great, smart, funny hosts, and good tunes. I ate mostly at McDonalds – no fuss service and good Wifi – but with one particularly nice meal on the first night somewhere in the middle of Illinois (steak and asparagus, perfectly cooked…). I had hoped to make it down in two days straight, but by the end of the second day I was still quite a ways from the vicinity of New Orleans, and, specifically, Houma, where I was going to meet Jeff, and it was raining, and dark, and I was tired, so I stayed an extra night somewhere in the south end of Mississippi and ate at the local Pizza Hut.

(A notice on a door at the hotel I stayed at, somewhere in southern Mississippi. Not something you see in Canada…)

The next morning, while it was still grey and gloomy, the rain had abated, and I made pretty good time from where I was to Houma – I think, minus one or two stops for breakfast and coffee, from where I spent the night, the drive consisted of maybe five turns… albeit spread out over the a distance of a couple of hundred miles. (P.S.: Miles rather than kilometers in the U.S. … that makes the distances seem more imposing). When I arrived, Jeff was out with Ronney, who I was to learn had provided the boat with a berth while Jeff is away from it, but after only about five minutes they showed up. Greetings to Jeff… and he immediately informed me that he’s now smoking – was that OK (only on the exterior decks, not in the cabin) – ? I’d been worrying the whole time about the fact that I’ve recently taken it up again and had bought a pack on the ride – maybe I would take the occasions to quit? Nope! And so, we smoked, and chatted.

When I arrived, Jeff was out with Ronnie, who I was to learn had provided the boat with a berth while Jeff is away from it, but after only about five minutes they showed up. Greetings to Jeff… and he immediately informed me that he’s now smoking – was that OK (only on the exterior decks, not in the cabin) – ? I’d been worrying the whole time about the fact that I’ve recently taken it up again and had bought a pack on the ride – maybe I would take the occasions to quit? Nope! And so, we smoked, and chatted.

And Jeff showed me around the boat. Sometime on the trip, Jeff asked me if it was turning out like I expected. I said I hadn’t know what to expect… and I hadn’t, really. This applied to the boat, too, although I’d seen some pictures on Jeff’s blog. It seemed kind of perfect – not a yacht or anything (in fact, all the better for that), but with plenty of space for hanging out both out-doors and in, kitchen, bathroom, ample sleeping quarters, etc. That afternoon Jeff took me on a short tour down one of the bayous; it was just absolutely great to be cruising along on a bayou in Louisiana. A little later we were visited by one of the neighbours who had been following Jeff’s blog, who gave us some advice for eats in town, and that night we ate in a perfect sea-food shack full of locals. Jeff’s not that keen on seafood, but I had the “Deep-Fried Trash” plate: shrimp, oysters, catfish, and whole deep-fried soft-shelled crab; there was leftover catfish for breakfast. We also did a quick stop for groceries – the plans were for me to cook a couple of meals on the boat, which I was more than happy to do. 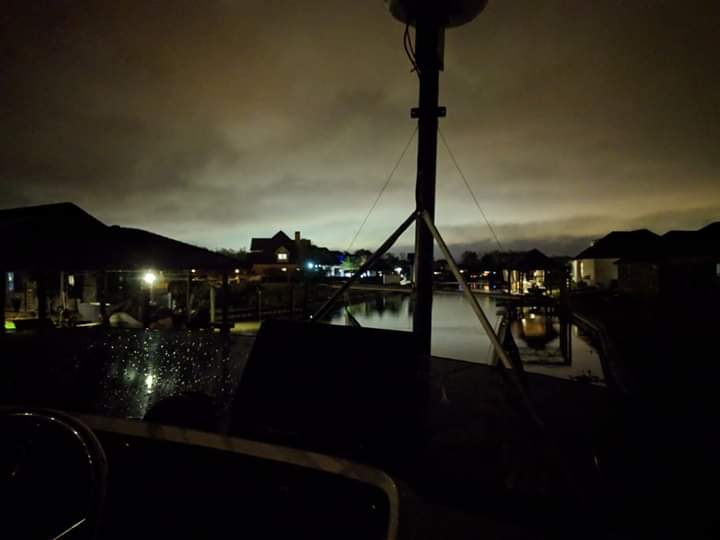 (Night time view from The Mazurka’s berth in Houma, Louisiana)

We didn’t get up too, too early the next day, which was fine by me, but once up, we were underway. Jeff had told me the night before that his plan was pretty much to sail down to the area on the Gulf-Coast that we had reached by car on the previous trip. This meant taking the Intercoastal Waterway, which runs between Texas and New Orleans, for some of the way, and then cutting off on a bayou down to the coast, rounding Grand Isle, and coming back up some bayous from there to return to the Intercoastal and back to our berth in Houma. This sounded fine to me, as did the speed at which Jeff intended to do this all in: not too fast at all. Good speed for bird-watching… and looking for gators, which Jeff was keen on seeing, too, if we managed to get lucky.

(Jeff guiding us out into the Intercoastal Waterway)

So… there we were, sitting on the top-deck, drinking our coffee and smoking while we lazily chugged along, chatting and scanning the landscape. Lots of boats! – this is more Jeff’s thing, but the number we saw, and the types, were impressive: lots for servicing the oil wells out in the Gulf, but also plenty of shrimp boats with their tell-tale nets hung out like wings from the boats’ sides. We also encountered a number of bridges which had to be opened for us and had been warned that this might eat up some time – and might even alter our route, as apparently some bridges won’t open at certain times of the day and season – but all proceeded according to plan, with no stoppages. The weather cleared as the day progressed, and while it remained a bit chilly, it got brighter.

As I’ve indicated, I’m a bird watcher, and there were lots for me to see: pelicans of both species, herons, egrets of all kinds, ibises, cormorants, anhinga (or “water turkeys” – kind of like a cormorant with a snake for a neck), turkey and black vultures, various hawks, ospreys, and eagles. I knew that I’d see a fair number, as on that trip in February I had seen lots of birds – and many that I had never seen before, thus filling out my “Life List” (birders have a list of all of the bird species they have ever seen – I have one in the front of my Roger Tory Peterson Field Guide to the Birds of Eastern North America, but also lists for Western North American Birds, and British and European Birds. I’ve been an on and off bird-watcher since I was a teenager). No life listers, but lots of times that I’d have to check my list to see if I’d seen them before.

We were also on the lookout for gators. As I’ve said, the last time we were down this way, Jeff and I drove up the Mississippi from New Orleans to check out the levies, which was Jeff’s principle interest, and to look for gators, which was mine – in keeping with being a birder, I’m a bit of an amateur naturalist in general, and especially when it comes to reptiles and amphibians. We ended up sneaking round the back of a gator-tour area having missed their last run for the day but didn’t find any – it was highly unlikely that we would, given the time of year. Maybe we’d see one in December? I’d been reading that it was possible – as I’ve said, apparently they’ll come out in warm weather in the winter months. Today seemed too cold for that, even though it was warming and brightening, but, you never know…

(One of the bridges – this may be the one on the turn-off from the Intercoastal Waterway into the bayou which we took down to the coast).

So there we were, chugging lazily along, taking in the scenery on the Intercoastal Waterway, when I spotted something out of the corner of my eye…

“Hey Jeff, do you see that? Over there?”

Jeff slowed the boat, and we moved in further. This is what we saw:

He was dead, unfortunately. The picture doesn’t quite do him justice: we estimated him to be about 10 to 12 feet long, which is a considerable sized gator even in Louisiana, which has both the biggest population of gators in the world, and as well, on average, the largest gators. Also, it was almost certainly a “he,” as male gators grow to the greatest sizes. We briefly debated whether to take the dingy down and go in for a closer look but decided against it: there was no telling how long he’d been dead and, in fact, he looked quite bloated. And it wasn’t exactly like we had the materials for skinning him or anything. So, we checked him out through the binoculars for a fair bit – I was particularly struck by how much his gator-paws looked like splayed hands, very much like The Creature from the Black Lagoon – and continued on our way.

We stopped for the night in a channel off the Intercoastal Waterway; the trees across the way were full of a flock of egrets. I cooked a dinner of curried chicken which we ate heartily.

(Our berth for the first night – egrets not pictured)